1. Belts Stabilize And Reduce Stress On The Spine

Some studies confirmed that wearing a belt during weightlifting increased intra-abdominal pressure by up to 40 percent, while one study reported that compression of the intervertebral discs was reduced by 50 percent. Increasing intra-abdominal pressure is similar to inflating a balloon inside your abdominal cavity. The pressure inside the abdominal cavity pushes on the spine to support it from the inside, while the core muscles in the abdominal wall and lower back push on the spine from the outside. This inside and outside pressure acts to stabilize the spine and reduce the stress it receives when lifting heavy weights. This is how lifting belts can help to protect against back injuries during lifting. It’s not due to the belt supplying the support, it’s due to the way that the body reacts to the belt that supplies the spinal support. 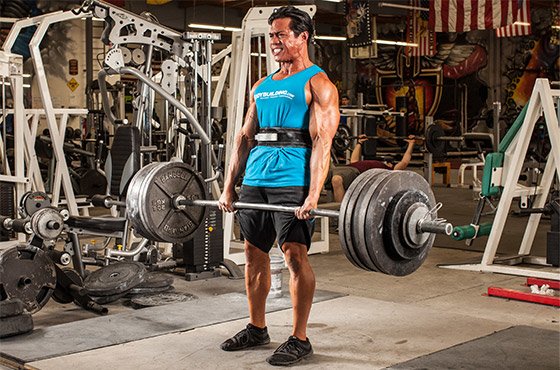 A weight belt stabilizes your spine so you can move more weight.

Research shows that when lifting boxes, wearing a lifting belt reduces the amount of spinal flexion (forward bend at the spine), spinal extension (bending back of the spine), and lateral flexion of the spine (bending side to side), but increases the amount of flexion at the hips and knees. In other words, a belt forces you to lift more with your legs than your back, which is precisely the biomechanical position you want to use when lifting something from the ground. These are also the biomechanics you want to use during deadlifts and squats with a barbell.

Will wearing a belt actually increase your power, strength, or muscle growth? Yes! According to some research, wearing a belt will help increase all the above, at least for lower body exercises like the squat.

If you comb through the scientific journals for weightlifting belt studies, you’ll have a hard time finding studies on the effects of wearing a lifting belt on one-rep max strength. So, I decided to do such a study myself back when I was running the Weider Research Group. We had 12 trained lifters who had been consistently doing squats for at least 5 years perform a one-rep max squat with and without a belt on two separate occasions in the lab. The belt they wore was a powerlifing-style belt that was 4-inches all the way around. We found that the belt allowed these lifters to squat an average of 10 pounds more than when they weren’t wearing the belt. Other studies have reported that the speed of the reps performed on the squat was about 10 percent faster when subjects wore belts versus when they didn’t. This was especially true during the later reps of a set. This suggests that lifting belts may help increase muscle power and help better maintain that power throughout a set.

Some research has also shown that wearing a lifting belt during squats increases the muscle activity of the quadriceps and hamstrings muscles. Having greater muscle activity during an exercise can help to better promote muscle growth in the long run.

I have to wear a belt on many exercises due to the fact that I have a hemivertebra. Basically, one of my vertebrae has a large section of bone missing, so I take advantage of any equipment, like a belt, that can help increase spinal stability during heavy lifts.

However, I also highly recommend that general lifters use a belt for exercises like squats, deadlifts, cleans, snatches, and bent-over rows. You might also want to use a belt on standing overhead pressing exercises. Definitely use a belt on heavy, near-max attempts where the reps are as low as 1-3 reps.

To get maximum benefit, you have to use a lifting belt properly. First, make sure your belt fits well. It should be quite tight, but not so tight that you can barely breathe or move. Your belt shouldn’t be extremely uncomfortable. You want to be able to press your core against the belt to increase abdominal pressure and stability.

Once you have the belt on, you must breathe properly with it during exercise. To do this on the squat, stand with a loaded bar on your back and, just before you descend into the squat, take a deep breath and hold it while pushing your abs against the belt. Hold your breath until you reach rock bottom. Then, attempt to forcefully exhale with a closed glottis as you drive up out of the squat.

This is known as the Valsalva maneuver, which means that you attempt to forcefully exhale against a closed airway, so you don’t actually expel any breath. You should be familiar with this technique when you bear down to have a bowel movement or pinch your nose and attempt to exhale to clear your ears. Yes, it’s the same thing during a heavy lift. Without performing the Valsalva maneuver, the belt will provide little benefit. Once you have reached the top of the squat, you can actually exhale.

Fast grow is one of the top trusted destination for anyone seeking health and wellness in their lives , Since it was established in 2016 Mogadishu Somalia Until now , Fast grow became the first and biggest Online store for sport supplements ,Vitamins and sportswear In Somalia .